According to the American Academy of Ophthalmology, more than 2 million Americans over age 50 suffer from advanced ARMD, which causes severe vision loss. There are two major types of ARMD, as described below.

Drusen are abnormal collections of extracellular material that build up in the deep layers of the retina. In ARMD, drusen tend to accumulate in the macula, which is the center of the retina. Therefore, central vision loss is the classic symptom of ARMD. Dry ARMD tends to worsen slowly over time, but a majority of patients still maintain functional vision. Unfortunately, at the present time, there is no cure for ARMD, so the goal of treatment is to deter the progression of disease for as long as possible with the cessation of smoking and the use of eye vitamins (see UPDATE: the AREDS 2 Study below).

“Dry” ARMD (left); note multiple, yellow spots of drusen accumulating in the macula, the center of the retina. Compare this to a picture of a normal retina (right); note the healthy pink retinal color without yellow drusen accumulation.

OCT image of “Dry” ARMD (LEFT image). Note the accumulation of drusen in the deep layers of the retina, seen as dense, irregularly shaped white areas. Contrast this with the OCT image of a normal appearing retina (RIGHT image), where the retina is uniformly thin with smooth deep layers without drusen accumulation.

Approximately 10-15% of all patients with ARMD suffer from the “wet,” or exudative, form of the disease. In the “wet” form of ARMD, in addition to the accumulation of drusen, the barriers between the retina and its blood vessels can break down, causing leakage of blood and extracellular fluid into the retina itself. This bleeding can penetrate all layers of the retina and cause devastating vision loss. Many cases of “wet” ARMD require injections of medications into the eye or, in rare circumstances, surgical intervention. 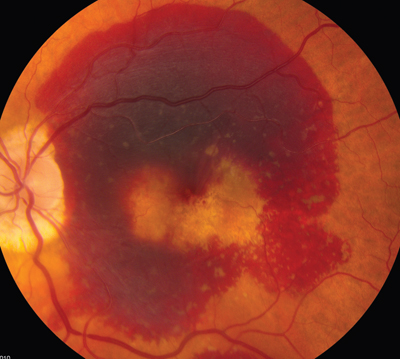 Picture of “Wet” ARMD; note the retinal bleeding that emanates from the center of the retina, caused by bleeding blood vessels in “wet” ARMD.

OCT images of “Wet” ARMD. Note the irregular contour of the deep layers of the retina, with elevation in the center filled with fluid and blood, causing decreased vision and “wet” macular degeneration.

The original Age-Related Eye Disease Study, or AREDS, reported in 2001 that the intake of vitamins C & E, Zinc, Copper, and beta-carotene helped reduce the risk of developing ARMD in individuals at risk. However, it was observed that in smokers, intake of the original AREDS vitamins was associated with a higher risk of developing lung cancer. The follow-up study, AREDS 2, was launched in 2006 to further investigate the protective effects of these vitamins by adding zeaxanthin, lutein, omega-3 fatty acids, and removing beta-carotene from the original formulation. The study concluded that while the addition of omega-3 fatty acids had no effect on the formulation, zeaxanthin and lutein together appeared to be safe and effective substitutes for beta-carotene. For more information, please refer to the following link to the National Eye Institute: